9/5/2022 -
By POWRi PR (Eldon, MO) -- Joe B Miller would use a late-race resurgence in the Lucas Oil POWRi 410 Wing Outlaw Sprint League feature event for Night 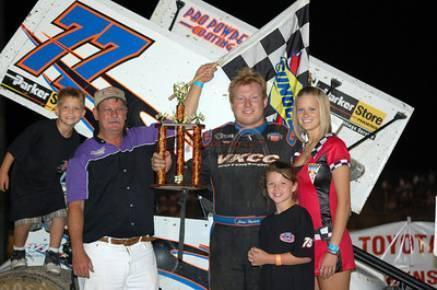 (Bill W) June 16, 2009 – Two wins last weekend give Jesse “The Rocket” Hockett eleven on the season. He picked up victories at Lake Ozark Speedway and Double X Speedway and just missed a third at Midway Speedway over the weekend. This week, plans are to run with ASCS-Midwest in Cameron, Missouri on Friday, in Kalamazoo, Michigan with USAC on Saturday, and return to Double X Speedway on Sunday.
The weekend started Friday with a Winged Outlaw Warriors tilt at the Midway Speedway in Lebanon, Missouri. After winning the heat going away after starting on the tail (8th), Jesse entered the redraw for the feature. “We had a poker hand for the feature start, and we had a terrible hand, so we ended up in row three,” he says. “The track was good over there. There was definitely a top and a bottom, though the top was a little better. You could maneuver around in lapped traffic if you had to.”
Soon he was second behind Josh Fisher. “It took us about three laps to get to second, but we just drove with Fisher most of the time,” he says. “We were able to get by him at one point, but the yellow came out and we had to go back. He was fast in the open track, and we just couldn’t quite get him. It seemed every time we would get close to traffic, the yellow came out. We took one last shot at him on the bottom at the checkers, and it ended up being a photo finish.”
A night at Lake Ozark Speedway near Eldon, Missouri on Saturday followed the runner-up finish. Uncharacteristically, Jesse went backwards in the heat in the Jesse Hockett Racing #77. “We had a new car we were trying out this weekend, and we struggled a bit in the heat race,” he says. “We finally got it going for the feature.”
Starting eighth in the main event, Rocket wasted little time in getting to the front and cruising to his third LOS victory of the year. “The track was probably the best it has been this year,” he relates. “It had a good top, and I was running low quite a bit through traffic. There was a defined bottom, and we were able to get up through there for the win.”
It was back to California, Missouri on Sunday. “We won our heat, but with the three row invert, we started sixth in the feature,” says Jesse of his winning run. Curtis Evans started on the pole and drove away. By the time we got to second he was a half a lap ahead of us.”
That’s when he started reeling in the leader. “We were able to run him down the last half of the race,” says Jesse. “There were no caution flags, so we had to pretty much run him down. A little bit of traffic got him, and we were able to get by with three laps to go.”
Variety will be the spice again this weekend. Jesse will compete with the ASCS-Midwest sprinters at the US36 Raceway near Cameron, Missouri on Friday. On Saturday, he’ll make the long drive to Kalamazoo, Michigan to compete on the pavement with USAC, before returning Sunday to Double X.
Sprintcar and Midget Magazine!
Jesse is the cover story for June’s edition of Sprintcar and Midget Magazine. Dave Argabright did a great job with the story! Go pick it up now!
On the Web
To learn more about Jesse “The Rocket” Hockett, including updated results and photos, visit http://jessehockett.homestead.com!
T-Shirt Trivia!
Last week’s answer: Jesse has won three features under the USAC banner. In September of 2006, he won in USAC/CRA action at United Sports Arizona in Tucson. In November of 2007 he won a prelim at the Perris (CA) Auto Speedway Oval Nationals. The next year he won the finale at the Oval Nationals worth $12,500.
Last week’s winner: Travis Nichols from Lee’s Summit, MO
This week’s question: What was Jesse’s first car number in sprint cars?
Each week, we’ll be giving away a Jesse Hockett t-shirt to our trivia winner! We will draw a winner from the correct answers submitted on Friday following the release. Submit your trivia answer, along with your name, address and t-shirt size to sprntcar@iowatelecom.net! Put "Hockett Trivia" in the subject line.
Rocket Rambles
On this week in 2006, Jesse topped a California 360 Civil War Series field at the Calistoga Speedway. The win was worth $2,300 and came ahead of Andy Forsberg, Peter Murphy, Garrett Ishii and Roger Crockett.
Partner Spotlight – ARP Fasteners
ARP is the world leader in fastener technology. ARP has grown from what was literally a backyard garage workshop into a highly diversified manufacturer with four operational entities in Southern California with a combined area in excess of 115,000 square feet. These include forging, machining, finishing and packaging/warehousing facilities in Santa Paula and Ventura, California. ARP products are available worldwide through local distributors. To find one near you, visit www.ARP-bolts.com!
Rocket Hockett
“Rocket Hockett” is an up close look at the past, present and future of Jesse Hockett. To receive "Rockett Hockett", send an e-mail to sprntcar@iowatelecom.net with "Hockett" in the subject line.
Jesse would like to thank the partners of the VKCC Motorsports/Tom Buch team, including Parker Store of Phoenix, AMS Waterfall Systems, Rod End Supply, LRB Manufacturing, Penske Shocks, Butlerbuilt Professional Seat Systems, Diversified Machine, Inc., Fischer Body Shop, Simpson, Hoosier, Conroy Bleeders, ARP Fasteners, Indy Race Parts, Massey’s Truck and Tank Repair, RMS Racing Engines, Pro Powder Coating, Korte Transportation, Rocket Graphics, Lucas Oil, Weld Racing, Spike Products, Maxwell, Red Onion Lounge, Engler, Barnes Dry Sump Oil Systems, FSR Racing Products, RH2, Canyon Apparel, JEI, Total Seal Piston Rings, JE Pistons and Wings Unlimited for all their help!.